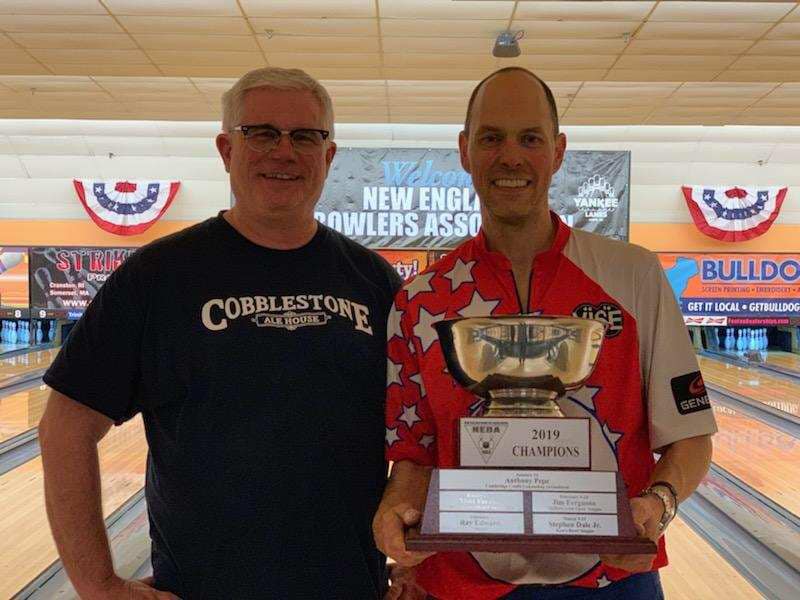 Chris Forry won his fourth NEBA title at the Yankee Lanes Singles Tournament in Keene, NH.  Chris took advantage of earning the last at-large spot in the finals with his 851 on the morning squad. By shooting games of 221, 224, 232 and 225 in the eliminator finals he earned a spot in the championship round.  He starting out striking and kept going to lock up the win 255-169 over Canada's Patrick Girard.  Chris won $1,550 plus an entry into the Brunswick Tournament of Champions while Patrick took home $970.  Chris is well known at NEBA not just for his bowling but for all the time and support he puts in off the lanes.  His company BuddiesProShop.com is NEBA's longest sponsor plus he was President of NEBA in 2017-2018.  Part of his term as our organization's leader was to create a more professional live stream which allowed hundreds of people to watch the final match.  Thank you to staff Yankee Lanes for another phenomenal weekend in Keene, NH and a special thank you to owner Jeff Barden for making this two day tournament happen.  The center added $1,000 to each of the two weekend's prize fund plus catered the Saturday night event.

Our next tournament is August 24-25th at Hall of Fame Silver Lanes in East Hartford, CT for the NEBA Extravaganza Weekend. Starting Saturday with the Senior Tournament and the BowlingSeriously.com Women’s Tournament - both tournaments have $1,000 added. On Sunday, the Chester and Bloomfield Electric NEBA Masters Tournament with $5,000 added to the prize fund.